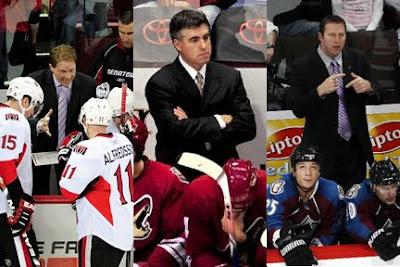 The candidates for this year's Jack Adams seem to be pretty cut and dry with the usual cast of characters coming from teams that everyone expected much less out of. Hence the reason for the award, the coach "adjudged to have contributed the most to his team's success." Getting more out of less, shouldn't it then be called the Barry Trotz? (The structural instability of putting a Barry Trotz replica or even a photo was deemed unsafe due to the high loadbearing weight at the top of the trophy.) And sadly that man's name doesn't appear anywhere on the trophy.

And it doesn't look to have a chance this year, as I'd probably put him fourth behind Dave Tippett, Joe Sacco, and Cory Clouston. Nashville's just not flashy enough to get the votes, I guess.

I, for one, did not expect Ottawa to have the success and competitiveness that they've shown this year. With the Heatley dilemma and the low return Bryan Murray got when the trade finally came to pass, not to mention the lack of a bonafide #1 goaltender with Leclaire's issues, it just didn't seem like Ottawa would be in the hunt, let alone be challenging for the Northeast Division lead. But Cory Clouston has done it, now with the elephant out of the room he's got command of it, and the Senators have listened, getting balanced scoring, and a buy-in to his attacking offensive strategy. But I've still got to rank Mr. Clouston third behind the two "feel good" stories.

The first of which being Joe Sacco and the Colorado Avalanche. Sacco was also involved in somewhat of an awkward situation when Patrick Roy was originally offered the head coaching job before the then current coach, Tony Granato had even been fired. Roy passed on the offer, Granato still got the axe, and Sacco was named head coach the following day. Promoted from the AHL farm team, the Lake Erie Monsters, he was credited for his work in grooming the younger players into NHL-caliber which fit perfectly with the youth that was filling the Colorado lineup. He's inspired that group to challenge for the Northwest Division lead when almost all experts picked Colorado to finish in the bottom of the standings. With the changing of the guard taking place on the Avs from veteran to youth, Sacco has made that transition appear seamless.

Dave Tippett was unceremoniously dumped and used as one of a few scapegoats for Dallas' miserable injury-plagued season of 2008-09. But Phoenix couldn't hire him as the new coach until Gretzky officially stepped down. Once that occurred on September 24th of last year, halfway through the preseason and nearing the start of the regular season, Tippett was officially hired just a few hours later. The situation in Phoenix was a constant distraction in the years prior with court precedings, low attendance, and the constant bashing by Canadian media to bring the team back north. Now that the League has officially taken over the team, the grumblings have quieted, but in some cases still remain. And that has allowed Tippett to guide this group into the postseason with a 40-22-5 record. There's no chance of challenging for the Division lead with a 10 point cushion for San Jose, but they all but have a playoff berth locked up for the first time since the 2001-02 season. This playoff appearance might be the evidence that the greater Phoenix area needs to prove to the rest of the League that the Coyotes belong there. On the other hand, it could prove the exact opposite if the City does not get behind the team in a playoff run.

In any case, it is a huge victory for the franchise thanks to the patience of Don Maloney, and the leadership of Dave Tippett, this year's 'Cinderella' story and my pick for the Jack Adams.
Posted by Nuuuuugs at 9:46 AM

the only reason that he wouldn't win the jack is cause it'll make the great one look like "the guy who might've been involved in betting AND couldn't coach his way out of a paper bag."

I don't see how he can miss, even if makes Gretzky look like a fool. As if last season didn't do that, or that faulty bay at the opening ceremonies.

Did you see his face?! Bitting his lip. LMFAO!

Things only got better when Tippett unceremoniously brought his "Free Moustache Rides" promo to an end.