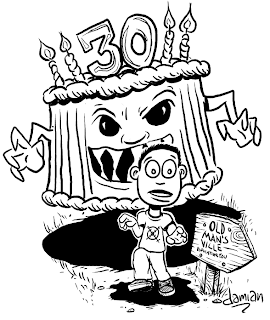 I don't know what to tell you... I'm slowing down, I forget things, I don't come up with as many things to forget, I'm thinking about my health. Age has hit me like a ton of bricks and I only turned 30!

The lack of posts has been embarassing and I deeply apologize to my legions of readers. All twelve of you. I've been tied up with all those things that end up in life's shopping cart as you hit middle age, marriage, kids, buying homes, buying small, fast cars to match up with your phallic size and shortcomings. I'd like to blame it all on an extreme consumption of booze but alas, my wife has curbed that as well. These are not thoughts, this is my life... you want to get on with the thoughts, okay, but thinking about what your team did in the offseason is just as depressing as whatever we were just talking about.


1. Please, step away from the Kovalchuk

Its not bad enough that this guy is completely worthless in his own end, its that he has the nuts to ask for an unholy amount of cash in order to feed his kids. And teams are bending over in order to entice him into putting it into their ass. I hope he drags his greedy ass back to the KHL, his inflated salary sinks the League, the poor of the country become enraged and take down the political structure, falling back into communism, just so that boyish Ilya is left broke and penniless, and responsible for the collapse of his homeland. That would be justice for all of us having nothing else to read but this retarded Russian soap opera.


2. St. Petersburg is Not Ust-kamenogorsk

No matter how bad you want it to be. Evgeni Nabokov has headed to SKA St. Petersburg of the KHL instead of taking an amount of money he's actually worth. Think I'm picking on these money-hungry Russians too much? Well, stop. Nabokov's actually from Kazakhstan. If obtaining the almighty dollar is more important than lifting the silver chalice than I don't want these fucks in my League anyway.


3. The Balance of Mediocrity is Shifting

Oh my friends from Calgary, I feel for you, I really do. Not only has the Daz Dismissal Counter gone Dodo, but now he's pulling reclamation projects out of his own 'Discard' pile. Bringing back Alex Tanguay to the Flames is strange but not entirely unexplainable given that he did have some chemistry with Iginla way back when, despite the large-looming fact that his best days are behind him, (that was meant for Tanguay, but sadly it applies to 'Romie as well.) But the move that made even the creepy Pierre McGuire speechless is bringing back Jokinen for only slightly less money. The ape was thought to be limiting his talent in Florida, and was stuck into a new laboratory in Phoenix. When that produced minimal results, he was dealt to Calgary with the Sutter braintrust hoping to have finally found a centerman for Iggy. Less than mediocre results prompted Darryl to deal him to the Rangers at the deadline for Higgins (now gone) and the puzzling Kotalik (now waived). Supposedly Daz admitted to "the Joke" that he never should have traded him, the primate grunted and nodded in agreement. If the roster swapping with Burke and the Leafs wasn't enough to send you to the ends of the Saddle, then this move has surely sent you over the edge.

The guy with a name fit for Nascar, Tripp Mickle from the Sports Business Journal dug up some crotch-kicking financial info for the League brass. Apparently, the little man from Queens rakes in about $7.2 million for being combative and argumentative with anyone who attempts to question his methods. Daly earns just south of $2 mil, and Collie makes less than a $1.5mil, and do more damage control than the boss. Its not bad enough that everyone hates this guy, but that he's overpaid to be hated? Sometimes I wonder if anyone in that position would be hated, or if its just that this smirking, shitty little troll makes it easier to hate him.

Four years for $14 million, approximately $3.5mil/year. Not too shabby for a young defenseman who shined alongside Olympic defensemen Keith and Seabrook. I would say its probably a $1mil to a $1.5mil too high but that's the point or the screws that Doug Wilson was trying to put to Stan Bowman and the Hawks. But Hjalmarsson played to the spotlight and was bound to get a few bites in the open market.

Is this gentleman's agreement ever going to go? I am amazed that more of these are not handed out by ruthless GM's looking to fuck a competitor over. I don't think I'm fully understanding the "penalty" an offering team suffers with regards to draft picks when a RFA accepts and the former team doesn't match.

The word is that all teams are basically holding until Kovalchuk signs or Kaberle gets dealt. I don't really understand this other than the fact that it has an impact on market value. But its not like 30 teams are in the mix for Kovy, the smart ones are staying out of it, and those desperate are decorating their anus with sprinkles. Burke is going to perpetually dangle Kaberle until he feels he's legally getting away with robbery. I get the feeling that Tomas is severly overvalued and if he was to be dealt that you would see a similar situation as Bouwmeester in Calgary for the team that lands him.

There's a ridiculous amount of free agents available. We could see a second opening day of free agency once the previously mentioned above mess gets sorted out. I'm not going to do the math, but I think there's more guys unsigned than there were signed after July 1st.

I get that feeling that Bouwmeester might have a bounce back season this year. But that still won't make Daz look like a genius. Or even competent.

Its funny how some teams respect the aging legends on their team, (see: Anaheim Ducks, Teemu Selanne, Scott Niedermayer), and other teams tell their legends that they're done, (see: Dallas Stars, Mike Modano). Ironic how the Ducks are one of the teams offering Mikey another year. The Wings don't have the space to pay him a respectable amount, while Minnesota doesn't offer anything remotely close to a shot at the Cup. San Jose would take on another aging vet but of course it would be under Wilson's hard line. Modano first stated that if he went anywhere it'd be somewhere in the Pacific Division before Ken Holland came calling.

Talk about somebody really waiting to see where the Kovalchuk stack of chips fall. He's been patient but its hard to tell if he'll be the next winger sought after "the decision" is made, or if GM's are staying away from yet another enigma. Frolov's going to chip a few in but never be a breakout or game changing player, he's just not. I don't think his salary demands are going to match up with the assessment, and he'll be off to the KHL.

Its amazing to see how the offseason game has changed with the nuances of the collective bargaining agreement and the development of the Kontinental Hockey League. I mentioned before there are hordes of legitimate free agents available, and now with the KHL as a semi-legitimate alternative, bonafide NHL players who are more interested in collecting paychecks than a place in history are heading to the other side of the pond.

Its become pretty apparent now that the Bruins are attempting to distance themselves from Marc Savard and his slightly shifted sponge. I still think his value is high, and its surprising to think that Chiarelli can't find a suitor for his playmaking. But the push to move him is a need to free up cash and reduce the glut at center.

Or maybe its just that other GM's don't want to deal with Chiarelli considering the way he's handled Savard and Thomas and issued them large multi-year contract extensions.

There's a chance that Nikolai Khabibulin could face 30 days in jail or be in Phoenix for court when the season opens or at the very least when training camp opens this season. Khabby was nailed for extreme DUI and speeding while nursing that injured back of his. Say it with me, "Speed." "80." That opens the door for the Oilers to get out of that $3.75mil per until 2013 that's hurting their back. Then again, Khabibulin might be the best player on that roster.

In a situation that's not all that different from mine at the workplace, Darryl Sutter may have very well found his replacement for the Calgary GM position. Jay Feaster, the enemy from the '04 finals was just hired as assistant GM to Daz in Cowtown. Apparently, the man who may be headed for a straightjacket contacted Feaster and brought him in to meet Ken King for an interview. So after dropping three members of the Flames brass, Feaster was hired to help clean up the mess that the Dazman has made. I guess this could be seen as an improvement for the Flames faithful, but then again I know how certain members of that congregation feel about Feaster. And not because of that Game 6 no goal.

A moment of silence for maybe the greatest pugilist to ever play in the NHL, Bob Probert.
Posted by Nuuuuugs at 3:22 PM 1 comment: