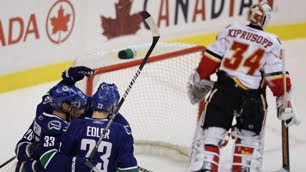 Vancouver 3 vs. Calgary 1
And it wasn't even that close. In a game that the Flames needed to win to prove that they are a legitimate playoff team, they fell flat.

The first period looked as if they were still waking up from their pre-game nap, as the Canucks charged hard to the net, and put in three behind a heroic Kiprusoff. They came out harder in the second, challenging the Vancouver rush and stomping out before it could gain enough speed, but they couldn't mount any kind of sustained attack. In the third, at least halfway through the third, they just played pissed off, and that was the best they played the whole game.

The Canucks had just returned from their road trip from hell, and played their first home game since in a 5-1 beating of the Senators the night before. That reason alone should have given the Flames enough of an edge to tackle the Nucks. It wasn't. Vancouver came out the fresher squad, coming right at the Calgary defense with speed, and confusing them to the point of looking really stupid.

The Flames sit a point back from the Red Wings in the eighth and final seed. They'll face them tonight at the Saddledome, and I'm sure they'll be coming out harder than they did last night.

Just a couple notes and thoughts from the game last night...
I'm really pulling for the Flambes to get in but this shows a not so good outlook, I'm not ready to write them off yet, but they'll once again, NEED to win tonight against the team they're challenging for the last spot, and keep that up for the following 13 games to get in.
Posted by Nuuuuugs at 2:13 PM