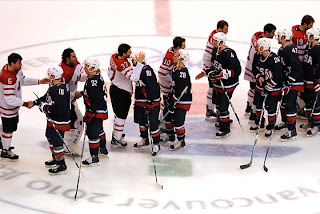 Plenty of crazy shit happening with the deadline, but there are far better sources to cover that hoopla than here. We'll just hit a couple then move to the carry over from the Olympics. Mostly bullets today folks, still feeling lethargic.

The 2010 Vancouver Winter Olympic Games
Spectacular. And the hockey was even better than that. The perfect matchup materialized for the Gold Medal game and we weren't disappointed in the least. Everything fell into place, Canada won Gold with the poster boy notching the winner, the Americans proved they were better than everyone thought, and we were treated to an amazing tournament of the best in the world. Can't really ask for too much more than that.

Teams
Goaltending
General
Hot or Not Lists
And who's carrying it over...

Agreed on Miller in that he shouldn't be blamed for the goal; in fact, all of the goals he was pretty much hung out to dry. And it wasn't Rafalski's fault either, b/c he was the first defenseman to the corner. It was the 2nd D's (Suter, I think) fault for not staying at home. We had two D in the corner.

U.S. performance aside, I wasn't as impressed with the hockey at the Olympics, because so many of the teams that were supposed to be solid underperformed (in a big way).

Don't forget to mention the puck that deflected off the ref's skate, a Canadian no less. Three Canadian striped devils in that game.

When the big teams like Russia, Canada, and Sweden sucked, they really sucked. But when the Canadians were hummin' it was awesome to watch.