Its Starting to Grow Mold 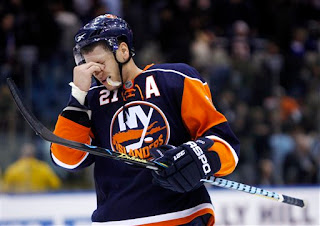 Its depressing to think that nothing fresh has been added to the fridge since the start of the season. Always having good intentions to start only to discover that this blogging interface has found a new way to piss you off. Whether its out of need or necessity, I felt the urge once again to give it a go, despite the inability to produce and break stories like the rest of the web wunderkind. Its Cyber Monday, (the next new greeting card holiday), and I don't feel like shopping or working, so we'll wade our way through the hilarical hijinks of this crazy League.

I owe Dustin Byfuglien an apology.
I predicted him to be a smug, unhappy fuck, begrudging the fact that he wasn't a retainable piece of the 2009 Blackhawks and instead being sent to one of the now many hockey hells in Atlanta. He was shifted back to defense, where he has shown defense but servicable ability, and has turned on a committed sense of leadership and desire to get this anchor of a franchise back on the boat and moving again. This week named one of the NHL's three stars with a 4 point game against Boston, and potting 9 goals and 16 assists for 25 points so far on the year. There's no sense of entitlement from him, just a good team guy laying it out on the line in a nearly empty arena.

Woe is Me.
Using that shitty lead in, I promise not to use the word woes when talking about attendance. It has been downright painful to look up from the ice and see tons of empty seats in the lower levels. Atlanta has always been bad, the Islanders can't give away seats, and Dallas is suffering badly. Even teams with good attendance wait until about 10 minutes into each period before the seats get filled back up. Hockey Night in Canada puts on full display the ACC bombthreat that gets called in at the start of the period.

Is this a good time to talk about contraction?
I don't know about you, but despite the fact that the game is more competitive than it has been in years, I'm starting to get the feeling that the talent pool really is watered down. When there's a regular story on Lee Stempniak's production, or lack there of, or Kevin Bieksa's potential LZ for a trade or how Cal Clutterbuck's mustache is growing. There are more than a handful of teams who have landed themselves in a perpetual vacuum of suck. Whether its by not offering the dough, or more importantly not being a desirable place to play, marquee players are staying away in droves and its a system that I only see continuing until the bottom falls out.

And you're left there hanging.
As the franchise moves from Long Island, to Stupidmoveville, to eventually Dumenuftotakem, the braintrust of WangSnow have decided to release Scott Gordon from the torture of coaching that godforsaken team. In the interest of doing something/anything, they'll use Gordon as a scapegoat for an AHL team playing in the NHL. And replace him with... wait for it... an AHL coach. Sound logic. Does that move strike you as something that would pull you out of a 14game losing streak? Here's the thing that gets me... These two idiots have admitted that the team is in a re-building phase, and Gordon was hired to see that shit through, come hell or high water. You've pretty much conceded the team's a loser for the season by putting together that roster, is this an attempt to show the fans you haven't done that already? And instead putting you further back from a successful season than you were a moment ago?

Who didn't see this coming?
Toronto getting impatient? Nahhh! The center of the hockey world can't wait the typical 5 to 30 year plan of franchise rebuilding? Who could have predicted that? Burke's making moves to make this team better, but it'll never be enough, the expectations are unrealistic. And they want to can Wilson because the team can't get it done? They'd be as dumb as the Islanders if they followed that genious thinking.

Kessel's made of cardboard.
With that said, Kessel is about as worthless as a hockey player as Ilya Kovalchuk. Sure, you can say these guys are purely offense but when you do the same two or three moves (1:44) when you're coming into the offensive zone this is going to happen to you more often than not.

Taking 'em down a peg or two.
And with a severe Napoleon Complex, its going to make it even worse. Tom Benjamin took the boots to reliable sports newsman Damien Cox after he took it upon himself to tear down Tyler Dellow's work on Collie Campbell's GMail account. Cox took the typical, "he's just a fat fuck blogger sitting in his mother's basement," line on Dellow without giving him credit for doing all the legwork on that story. Tommy reminds Cox about his shotty journalism unaccountability capping it off with the early, and inaccurate posting of Pat Burns death weeks before it happened. I'll admit it, I love Benjamin and I hate Cox, but you've got to admit what's right is right. Cox is an opinionated journalist who likes to make news instead of reporting it. Benjamin's a no-nonsense whistle blower, who when he smells shit, he calls it shit.

I'd like to get into the whole Campbell thing, but I'm not gonna, not at this point anyway. Hopefully another time, but I've promised shit before and didn't deliver, and it'll get old and something else will stir the pot. So until then.
Posted by Nuuuuugs at 3:24 PM No comments: