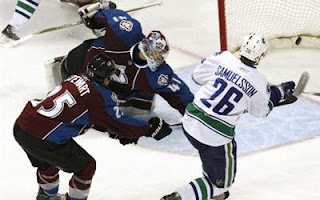 You could look back at almost every game last night and see the implications for each team in their quest to extend the season. Their wins or losses all made statements as to the season behind them, and their chances in front of them. The standings as they sit now are very different from what we would normally expect, and certainly from what we predicted at the beginning of the season. Of course, that's more so from the West than the East, with teams like Phoenix, Los Angeles, and Colorado in the mix, and teams like Detroit and Calgary fighting for their postseason lives. But last night's results spoke loudly as to who's in it and how bad they want it.

Vancouver 6 Colorado 4
The Canucks are on the tail-end of an epic 14-game road trip that required the team to get out of town for the Olympic setup and cleanup. They've got one game left to play against Phoenix and have gone 8-5 with 6 come from behind victories on that stretch that gives them the League lead with 10. This game meant even more, giving them a four point lead on the Avs in the Division. Everyone knew that this road trip would determine their season, but they've only climbed in the standings because of it. Right now, this team looks poised to make a deep run in the playoffs.

On the other side of the coin, no one expected the Avalanche to have the kind of season they are having, but with the infusion of youthful speed, a now proven #1 goaltender, and solid direction from rookie head coach Joe Sacco, they sit sixth in the Conference and are almost assured a playoff spot. But games like last night show that they have a lot to learn, letting off on the gas with a 3-0 lead in the first frame.

Calgary 4 Detroit 2
The Flames have struggled mightily after passing the halfway mark, and Darryl has tried his best to really shake up the team with questionable trades. They are starting to show a little more life with this new look, winning four of their last five with wins over Jersey and Detroit, their 8th seed competitor. Their schedule to April is none too kind, with 11 of 16 games against playoff-caliber opponents. Their playoffs start now.

Detroit has nearly the same story, with their down year coming from the injury plague. The Wings are a dangerous team year in and year out, and if they can get in they'll play that scary 7 or 8 card that knocks out the top seeds in the first round (*cough*Sharks*cough*). But I'm not convinced that they can do it, even with a number of their better personnel returning to the lineup and Jimmy Howard's improved play, they look like a team disinterested.

Toronto 4 Boston 3 OT
This game says more about the Bruins dropping like a rock than it does about the Leafs slowly improving. In all honesty, the B's had their best chance last season, and fell apart in the playoffs, and then in the offseason losing key contributors on their team that were viewed as spare parts. In terms of production, everyone on that team is down, Chara's scored something like 4 or 5 goals compared to last year's 19 or 20 total, Savard's been in and out of the lineup with injuries, and Kessel took off for Toronto. Savard now looks to be down for the count with that concussion, and the Bruins just don't have enough offense already, to carry on without him. Thomas hasn't looked all that great either, just to make matters worse.

Nashville 2 Atlanta 1
Clinging to the seventh spot, the Predators are pulling out wins despite the fact that they should be handling teams like the Thrashers rather easily. Always playoff contenders but never a Cup threat, the Preds are right about where they normally are. No-neck Trotz is a magician at producing a lot from a little, but one day when there's financial backing behind this team, they'll realize that they'll need to spend some money to get some key personnel to push them over the edge.

Atlanta is still technically in it, four points behind Boston in the eighth spot, but losing the last four does not bode well for your cause. Don't get me wrong, I'd love to see that team in it, that team needs something to be proud of, and to do it without Kovalchuk would be monumental, but they just can't seem to get it done. Just a team in what seems like perpetual re-building.

Philadelphia 3 New York Isles 2
Philly came from behind to win this one, against a team they should have easily beaten, especially given the prospect at the beginning of this season that they should be Cup contenders. Coaching changes and freak injuries aside, games like this show that while Philly got themselves back into the race, they're still a ways away from being a legitimate threat. Of course, anything can happen in the postseason, but goaltending and fortitude will be the concerns for this team heading into the extra season.

I believe that this loss puts the Islanders out of the race, mathematically.

Montreal 5 Tampa Bay 3
The Habs have won their last three and look to make the lower seedings. Technically, they could get knocked out with a dramatic fall from grace, but they've played well on their road swing West taking 2 of 3, and the pressure from the bottom doesn't seem to be strong.

Cue the pressure from the bottom. The Lightning are 5 points out at the moment, but with the resurgence of Marty St. Louis teamed up with 40goal Stamkos, and Steve Downie of all people, the post is possible, but highly unlikely. Lecavalier has been half the player he is this year, and I wonder if we'll hear about a season-ending surgery when their officially out of it.

Ottawa 4 Edmonton 1
The Senators could have beat up on the Oil a lot more last night, but held off instead. Ottawa is tied for the Northeast Division lead with Buffalo at 79 points. I've never given them much credit this season and they've proven me wrong. They'll definetely make the post but will be battling it out for the top seed of the Division. They'll need that killer instinct in the playoffs to get beyond the early rounds.

What can you say about Edmonton aside from a team that is looking forward to the draft. They look absolutely lost out there, chasing after opponents in their own zone, and not producing any kind of offensive attack. Its pretty embarassing, and teams are feeling sorry for them as this score shows.

Columbus 5 Anaheim 2
I think this is pretty much the nail in the coffin for the Ducks playoff chances. They're seven points back from the eighth seed, and they badly to a team having a miserable season. There's no reason the Ducks should be out of it with a big handful of Olympians on the team, despite the fact that their defense has been depleted. Without Hiller's performance in the Olympics people would be questioning Bob Murray's decision to send Giguere to Toronto for essentially Blake.

Sophomore slump doesn't describe Steve (not Chris) Mason's fall from Calder honors last year. Hitchcock was tossed after his philosophy got tired on the bench and the team just gave up. Its a shame that this team couldn't build on last year's postseason appearance, but at least they can add some future talent at the draft.

Skipped Florida's 3-2 shootout win over Minnesota for the futility of it all.

Playoff Seeds
In the East, I think the spots are pretty much set with the exception being the eighth and final spot. Boston should make the playoffs but they're in such a funk right now its easy to see the Rangers or Thrashers or even the Lightning slipping in past them. Gaborik is out for the Rangers virtually eliminating their offense which dramatically affects their chances. I'll bet that Boston stays in, but it could go either way.

One through eight goes like this...
1. Washington
2. Pittsburgh
3. Ottawa
4. New Jersey
5. Buffalo
6. Philadelphia
7. Montreal
8. Boston
In the West, I think Dallas is already out of it and it really comes down to Nashville, Calgary, and Detroit. All logic would say that the Predators and Wings get in, but I think the Flames will gut it out and join the Preds at the dance. Probably more hope, than think, but...