There she is, in all her miserable glory. A further elaboration from the wake up call of yesterday's post. No confidence in this whatsoever, even though there aren't many risky moves out here. Well maybe a few, depending on which fanbase you talk to. I've got the Finals at a seven-gamer between the Canucks and Penguins. I think the Pens have a better shot of getting there than the Coconuts, but that's just me. And apparently every other pundit, (or idiot with a blog). Separated East and West brackets below. 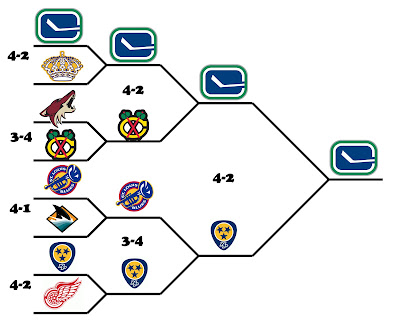 The risky here is the Predators making it to the West finals, then again, you could probably say that about the Canucks too. Its funny, they win the President's Trophy the last two years, and they still seem to be the odds on upset. I could easily see the Blues making me look like an idiot too, but that wouldn't be there fault, the blame would be squarely on me. 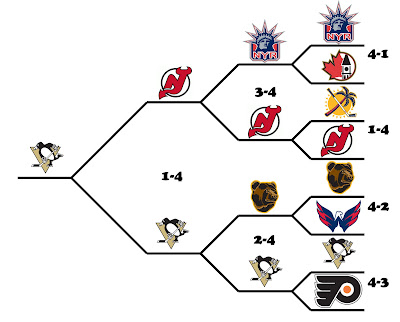 I really don't see much risk in the first round picks in the East, other than the glorious 4/5 matchup, which is always problematic. Like I mentioned earlier, the Pens seem to be the favorite for going long. The risk here is pushing the Devils to beat the Rangers. Honestly, I'm biased. My hate for the Rangers is too damn strong. But even if they pass the Devils, I think they're dead in the water against the Pens. Honestly, I think whoever wins the battle of Pittsburgh goes to the Cup Finals.